Ponceau S is a fast, reversible protein stain often used to confirm that protein samples have successfully transferred from the gel to the membrane before a researcher moves ahead with the time-consuming process of immunoblotting. Staining the membrane after transfer makes it possible to quickly and easily identify any problems such as incomplete or uneven transfers, or artifacts due to the presence of air bubbles, before probing the blot with antibodies. In addition, staining the blot with some total protein stains can provide a standard for total protein normalization of quantitative Western blots.1

However, though Ponceau staining is reversible, it is not compatible with fluorescent Western blot detection. Even after thorough destaining, Ponceau stain can leave an autofluorescent residue on the membrane that increases background fluorescence.

The figure below shows a multicolor fluorescent Western blot. The right half of the blot was stained using Ponceau and then destained before immunoblotting. 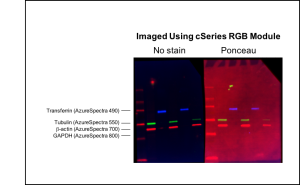 Both halves of the blot were then blocked with Azure Fluorescent Blot Blocking Buffer and probed for four proteins using four different fluorescent probes as labeled in the figure. The blot was imaged using the Azure cSeries RGB module which assesses Cy2, Cy3, and Cy5-compatible channels. Despite thorough destaining, a very high fluorescent

background is seen on the half of the blot that was stained with Ponceau.

The figure to the right shows the same blot imaged using the Azure cSeries NIR module, which assesses 700nm and 800nm channels. The fluorescent background is reduced in the NIR-imaged blot, but is still substantial compared to the unstained half of the blot.

Detecting a fluorescent anti-cancer drug using the Azure c600 imager
Quantitative Westerns: What is the best way to normalize your Western blot?