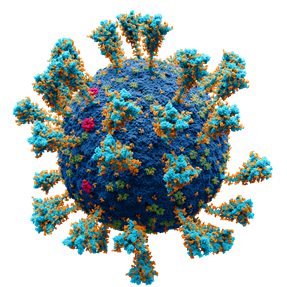 Infectivity of SARS-CoV-2 is associated with high viral loads in the upper respiratory tract. Alpha and gamma immunoglobulins (IgA and IgG) both neutralize viral infections, with IgA significant in mucosal immunity and IgG predominantly affecting blood. Most studies focus on IgG in SARS-CoV-2 infection, but the role of IgA is less understood.

In a preprint shared on ResearchSquare, Zhou et al investigated whether intranasal IgA could protect against SARS-CoV-2 infection in Syrian hamsters. The study is currently under review so the current version is not peer-reviewed or published in a journal. The authors report that neutralizing IgA antibodies, applied intranasally before SARS-CoV-2 challenge, reduced the amount of virus in the lungs but increased viral infectivity in the nasal turbinate of the hamsters.

The authors isolated and characterized 18 RBD-specific monoclonal antibodies from four COVID-19 patients. Five of these showed neutralizing activity against SARS-CoV-2. The one with the tightest binding to RBD was tested in the hamster model to see if intraperitoneal administration of the antibody before or soon after viral challenge would affect infection. It did decrease viral loads in the lungs but did not prevent infection in the nasal turbinate.

The group then engineered monomeric and dimeric IgA1 and IgA2 versions of the antibody and tested these in hamsters, either by intraperitoneal injection or nasal administration. The monomeric IgA1 but not IgA2 protected lungs, while neither prevented nasal infection. When dimeric versions of the IgA1 and IgA2 were tested, they were found to decrease infection in the lungs but increase infection and enhance damage in the nasal turbinate.

Why would dimeric IgA enhance SARS-CoV-2 infection? The authors found that the IgA-mediated enhancement did not depend on the ACE2 receptor. Instead, the targets were dendritic cells expressing CD209, a lectin known to be a receptor for secretory IgA.

In the course of this work, the authors used the Sapphire Biomolecular Imager in viral neutralization assays and assays of enhanced infection via CD209. For each assay type, cells were grown in 96-well plates and infected with SARS-CoV-2. The media was removed, cells permeabilized and SARS-CoV-2 was detected with an rabbit anti-virus primary antibody followed by a goat anti-rabbit secondary antibody labeled with Alexa Fluor 488. The resulting fluorescent signal was detected on the Sapphire.