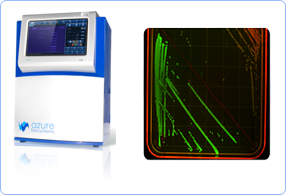 Digital imagers like the 400 can be used for more than just gels and membranes. Other sources of fluorescence on a flat surface can be captured by the imager, including bacterial colonies on a plate. Fluorescent proteins like GFP variants fall in the visible range, meaning the 600 is another option as a digital imager.

Examples of when this might be useful include: on-plate screening for gene insertions or mutations, protein-protein interaction studies, gene transfer studies, characterization of colony morphology, or verification of fluorescent protein expression.

Bacterial plate imaging with the 600

The image to the left shows an agar plate with E. coli expressing GFPmut3 (green) and mCherry (red). The plate was imaged using red and green LEDs in the 600.